I failed with flying colors. This is not the Christian success story you were hoping to hear. Instead, it is a story of failure, failure to respond biblically and maturely. I don’t like admitting that about myself, but I am beginning to see how even my response in the midst of affliction is grace. Exposed and raw, I saw my sin amplified more than I thought possible. So God does this work of “letting bad things happen” to reveal our sin nature. I find out who I really am before He can rebuild again.

Corrie Ten Boom once said, “Before He can use us He must gently crush us.” This is part of an ongoing story because faith is never wrapped up in a neat little bow this side of heaven. Life is messy and unpredictable. That is when we are called to simply trust, working out our salvation with fear and trembling (Philippians 2:12) until Jesus takes us home.

Tuesday, October 25th I kept Jesse home from school due to a sleepless night before. There was nothing out of the ordinary that day as Jason went to work and I set about getting house chores done while Jesse quietly played. I felt completely fine with no warning signs to indicate the rest of the day. Shortly before noon I read a text from a friend when suddenly I became horribly dizzy and nauseous. The feeling sent me reeling, as I hit the floor to keep the room from spinning (which did not help). Right before falling to the ground I had the forethought of grabbing my phone if this became an emergency. It escalated to emergency status within seconds as I started vomiting uncontrollably. Jesse found me and started crying because he knew I was in distress. He ran to another part of the house, where I listened to him cry, and I didn’t see him again.

By God’s grace Jason answered his phone when I tried to call him. I remember feeling like I might pass out or die, because I’ve never experienced either until that moment. My body shut down as I lost control of my senses, becoming incredibly weak and incoherent. Jason called one of our neighbors to come over before he could get home. She was also an agent of grace, occupying Jesse while Jason took care of me. The paramedics soon arrived and took my vitals, which were fine even though I was the worst kind of sick I have ever felt. They noted my electrolytes were low and concluded that it must be a virus of some kind. So my very first ambulance ride I missed because I wasn’t all there to say the least. 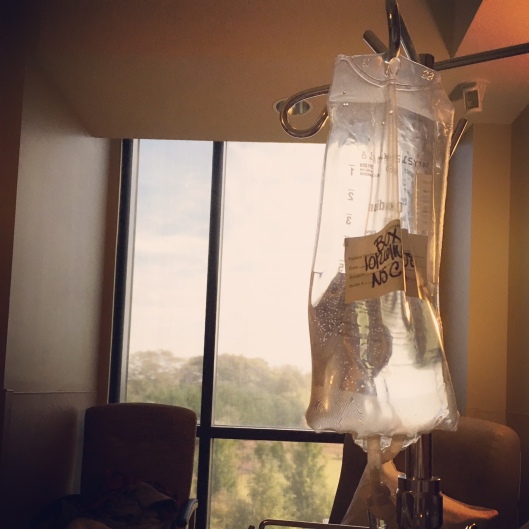 I remember the ER room. It was like a dream I wanted to wake from, being poked with needles, beeping machines, T.V. noise, endless emergency hallway chatter, and so many nurses in and out of a space that could have been a walk-in closet. Everyone hovers over the bed like I’m a riddle to be solved. But the medical staff is there to save lives no matter the cost, especially sans dignity. I’ve not had many hospital encounters, but there is none of that whatsoever and it doesn’t really even matter at that point. Everyone is there to do his or her job.

I’m told my heart went into an abnormal rhythm in the Emergency Room. Atrial Fibrillation. My heart was off running a marathon, leaving me in a hospital bed. The anti-nausea medicine finally kicked in and I became more lucid. Finally, I started to notice my surroundings more, trying to comprehend all that had taken place in the last few hours. My poor, sweet husband was wrestling with that same question too. He bore the brunt of my drama trauma fielding phone calls, text messages, and questions from paramedics, nurses, doctors, friends and family.

I wasn’t angry until the next day, even after God had answered many prayers from loved ones allowing my heart to convert back again to a normal rhythm. I was still grasping for answers, trying to wrap my mind around everything. I barely kept my head above water each day before all of this happened and now I was completely knocked down. I was tired. Tired of striving. Tired of wanting God to care because I thought he must not. I started listening to my fickle emotions instead of firmly setting my hope in the promises of God:

“Never will I leave you; never will I forsake you” He says in His Word over and over (Hebrews 13:5; Deuteronomy 31:6, 8). I forgot that God is always faithful, even when I’m wretched and hostile. But He calls me to be faithful as well, and I instead turned the other way. “How could God do this to me?” I asked in pride and anger. “Is it not enough to take care of an autistic son, sleep very little and live a stress-filled existence without this on my plate?”

I was trying so hard to pursue God, and I believe I was, but at the same time I left little room to just rest. Rest in His grace that doesn’t require a juggling act or high marks.

Jesus used Peter, a common fisherman, hotheaded and impulsive to later become the rock of the church (Matthew 16:15-19). He called Saul, and renamed him Paul, from persecuting Christians to preaching the gospel to them. These two men were imprisoned for their faith and died because they followed Jesus Christ, knowing that the hope they had would be made sight. And it has for them.

I hope that for you and me too. Sometimes living out our faith feels more like a boxing match. But in the end, I want to say along with Paul that “I have fought the good fight, I have finished the race, I have kept the faith” (2 Timothy 4:7). If anything, I’ve learned that we are not meant to have all the answers. There is still no explainable medical reason as to why all of this happened on that Tuesday – just a bunch of guesses.

We are called to simply trust that God is Good and Sovereign even when we don’t understand our life circumstances. And I am learning that He really is faithful. “Bad things happen even to forgiven people”, says Pastor Stephen Davey, but it doesn’t mean God does not love you or has stopped loving you. What if it means quite the opposite? What if growth can only happen in the storms?

When you find yourself there remember that the heart of the matter is how your heart responds to Him. Will you run to Him or from Him? Don’t follow my example of pitching a fit when things get hard. God will show you the exact measure of your faith when life doesn’t turn out right. You might find it humbling. But it’s also grace – the hard places, because my pride and self-reliance was and is being chipped away. And that is very good news.

8 thoughts on “A Matter of the Heart”